ENABLE Youth Cameroon kicks off with signing of implementation framework 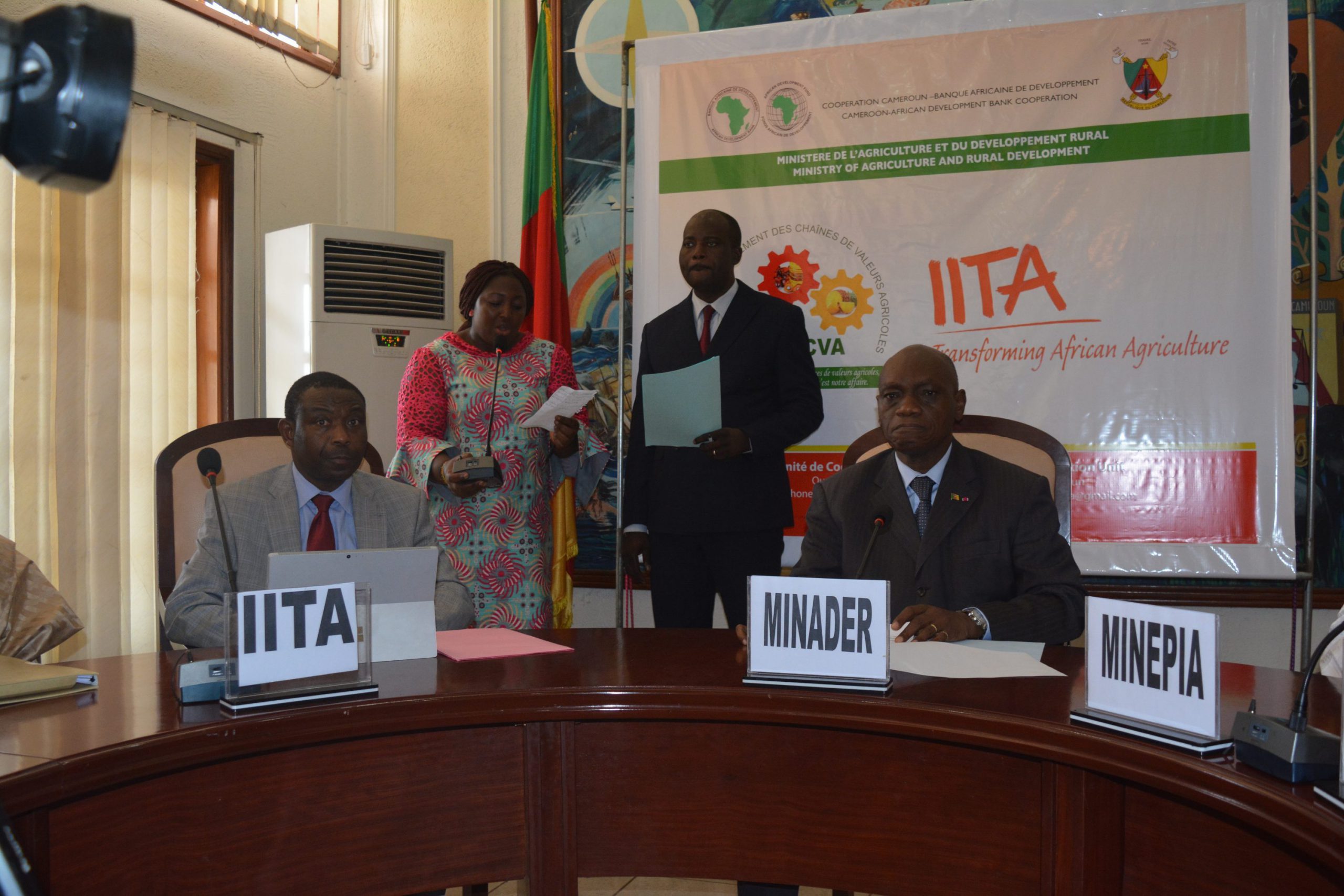 Posted at 02:43h in Agriculture, EYC-News by webteam 0 Comments
0 Likes

The Cameroon chapter of the Empowering Novel Agri-Business-Led Employment (ENABLE) Youth Program has now started in earnest with the signing of an agreement between the Ministry of Agriculture and Rural Development (MINADER) and IITA. The implementation framework was signed on 17 May at a ceremony held in Yaoundé, the Cameroonian capital. Several state dignitaries were in attendance including Minister Henri Eyebe Ayissi of MINADER, as well as representatives of the African Development Bank (AfDB) and IITA. 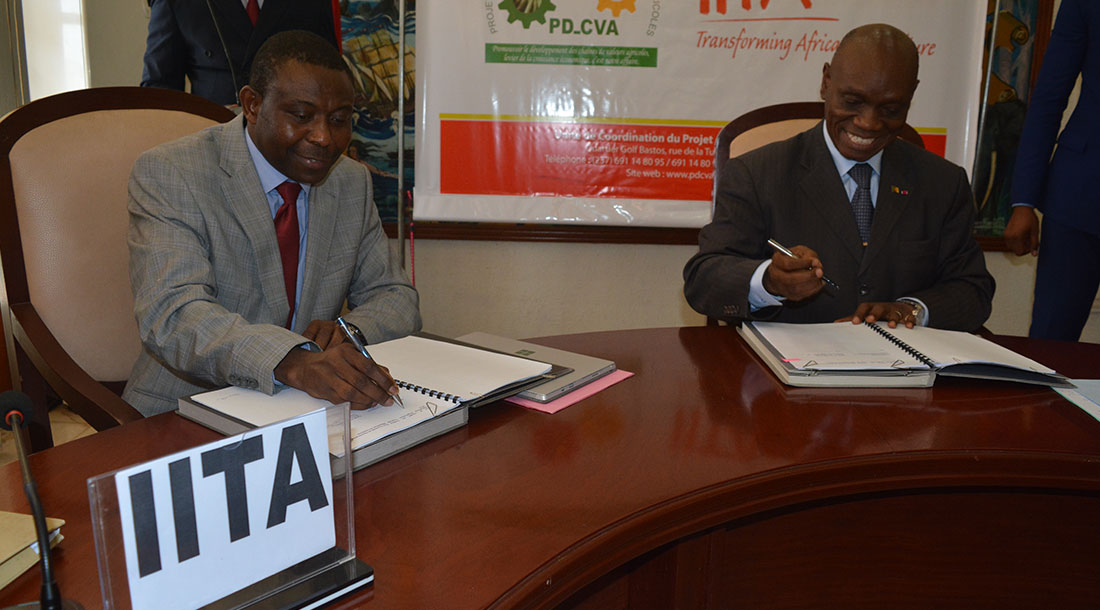 The agreement was signed with the understanding that IITA has the facilities and skilled personnel necessary to pursue the objectives and fulfill the requirements of this collaboration which is being implemented under the ENABLE Youth component of the Agricultural Value Chain Development Project (AVC-DP) [in French: Projet de Développement des chaînes de valeurs agricoles (PD_CVA)]. As part of the agreement, IITA will lead and administer 12 Youth Agribusiness Incubation Centers (YABICs) over 45 months following the IITA Youth Agripreneur business incubation model. This is expected to expand opportunities in agriculture and agribusiness to rural youth in Cameroon to advance rural livelihoods and economic development, and to serve as a model for youth-led rural transformation elsewhere across sub-Saharan Africa.

In his opening remarks, Minister Ayissi expressed the Government’s appreciation to AfDB for their support in setting up the framework for this mutually beneficial collaboration. “The aim is to contribute to improving the well-being of the Cameroonian population in all fields, and particularly in the field of agriculture and rural development,” he stated.

Indeed, the PD_CVA is a joint initiative between the Government and the AfDB for the promotion and development of value chains of palm oil, plantain, and pineapple on the one hand; the implementation of transversal infrastructures as well as the reinforcement of related actions, such as the Youth Entrepreneurship in agriculture and agribusiness and the Credit Access Mechanism for actors in the sectors and especially young people, among others.

The Minister urged all stakeholders, and especially the technical partner (IITA), to make every effort to ensure the success of this important youth initiative. “The Government, in all its branches, will spare no effort, to provide all its support so that the expected results are a success story in Cameroon and Africa,” he concluded.

Speaking on behalf of IITA Director General Nteranya Sanginga, IITA Cameroon Country Representative Cargele Masso gave an overview of the origins and activities of both IITA in Cameroon and the Youth Agribusiness program in general. “IITA’s interest and commitment to the promotion of youth in agricultural entrepreneurship stems from its mission to reduce poverty through the development of agricultural value chains that create wealth and jobs,” he said. “It was this commitment that compelled DG Sanginga to set up the IITA Youth Agripreneurs (IYA) in 2012 as an initiative to equip young graduates to participate productively in the agricultural sector, especially in agribusiness.” 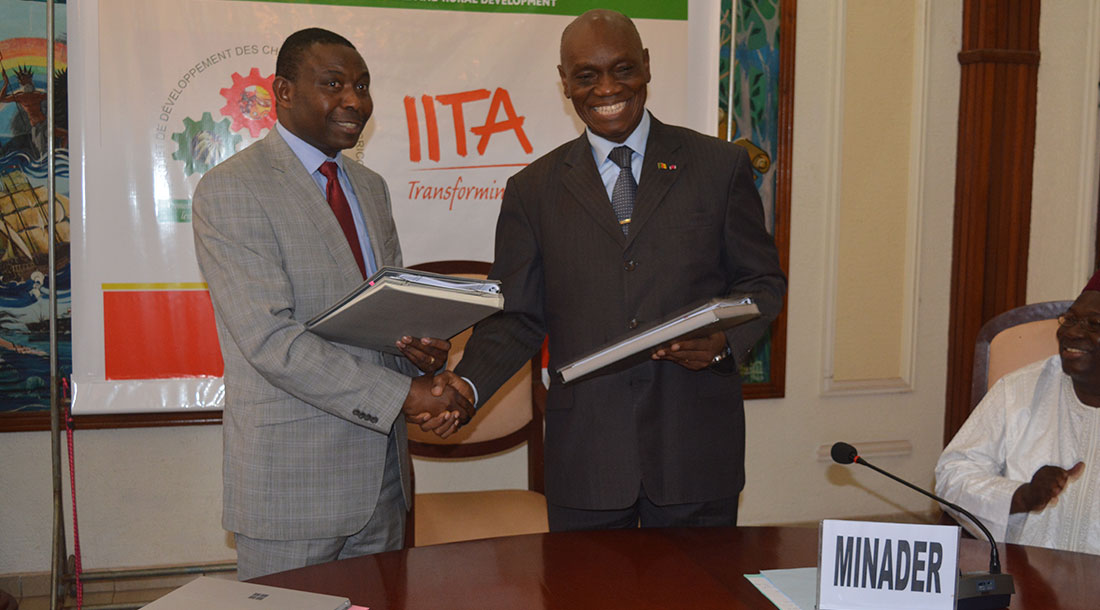 Through this initiative, IITA seeks to demonstrate with examples of youth success that agriculture can be a stimulating and economically rewarding enterprise and convince stakeholders to invest in African youth,” he said. “This initiative, which has been very successfully experimented in Nigeria, Tanzania, the Democratic Republic of Congo, Kenya, Uganda, and Zambia, fits well with the ENABLE Youth program of the AfDB. The aim of the program is to strengthen the capacity of young graduates to create businesses along agricultural value chains, through agribusiness project incubators,

As part of the agreement to launch the ENABLE Youth Program in Cameroon, an incubation calendar in agribusiness will be established for training, which will include basic operations of the company and the development of business plans. By the end of the project, IITA will have trained 1,536 Agripreneurs who will launch at least 600 new agribusinesses and employ over 6,000 additional persons, including outgrowers.

The ENABLE Youth Program in African Agriculture is being championed by the AfDB in collaboration with IITA to develop the next generation of African entrepreneurs in agriculture. The program ensures that young entrepreneurs approach agriculture purely as a business, with the central objective of establishing viable and profitable enterprises.